How to Build a General Intelligence: Reverse Engineering 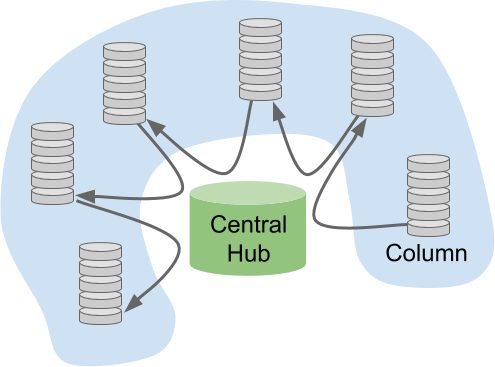 This is part 2 of our series on how to build an artificial general intelligence (AGI). This article is about what we can learn from reverse-engineering mammalian brains. Part 1 is here.

It doesn’t matter if we are missing some details, if the overall picture helps us understand the nature of general intelligence. In fact, excluding irrelevant detail will help, as long as we keep all the important bits!

These articles are not peer reviewed. Do assume everything here is speculation, even when linked to a source reference (our interpretation may be skewed). There isn’t space to repeatedly add this caveat throughout these articles.

First we’ll review and interpret the gross architecture of the brain, focusing on the Thalamo-Cortical system, which we believe is primarily responsible for general intelligence.

The Thalamo-Cortical system comprises a central hub (the Thalamus and Basal Ganglia), surrounded by a thin outer surface (the Cortex). The surface consists of a large number of functionally-equivalent units, called Columns. The Cortex is wrinkled so that it’s possible to pack a large surface area into a small space.

Why are the units called Columns? It’s the physical structure of their connectivity patterns. Cells within each Column are highly interconnected, but connections to cells in other Columns are fewer and less varied. Columns occupy the full thickness of the surface, approximately 6 distinct layers of cells. Since these layers are stacked on top of each other and are loosely connected between stacks, we have the appearance of a surface made of Columns.

Confusingly, there are both Macro and Micro-Columns, and these terms are used inconsistently. In these articles we will simply say ‘Column’ when referring to a Macro-Column as defined in a previous post.

In the previous article we described the ideal general intelligence as a structure made of many identical units that have each learned to play a small part in a distributed system. These theoretical units are analogous to Columns in real brains.

Columns can be imagined to be independent units that interact by exchanging data. However, data travelling between Columns often takes an indirect path, via the central hub.

The hub filters messages passed between Columns. In this way, the filter acts as a central executive that manages the distributed system made up of many Columns.

We believe this is a fundamental aspect of the architecture of general intelligence.

In mammalian brains, the filter function is primarily the role of the Thalamus, although its actions are supported and modulated by other parts, particularly the Basal Ganglia.

Other brain components, such as the Cerebellum, are essential for effective motor control but maybe not essential for general intelligence. They are not within the scope of this article.

Connections between columns are reciprocal: “Higher” columns receive input from “Lower” columns, and return data to the same columns. This scheme is advantageous: Higher columns have (indirect) input from a wider range of sources; lower columns use the same resources to model more specific input in greater detail. This occurs naturally because each column tries to simplify the data it outputs to higher columns, allowing columns of fixed complexity to manage greater scope in higher levels, as data is incrementally transformed and abstracted.

Only Columns in the lowest levels receive external input and control external outputs (albeit, often indirectly via subcortical structures).

Note that there are not necessarily fewer columns in each hierarchy level; there may be, but this is not essential. However, abstraction increases and scope broadens as we move to higher hierarchy levels.

We can jump between the physical and logical architectures of the Cortex. Moving over the surface implies moving within the hierarchy. It also implies that moving between areas we will observe responses to different subsets of input data. Moving to higher hierarchy levels implies an increase in abstraction. We can observe this effect in human brains, for example by following the flow of information from the processing of raw sensor data to more abstract brain areas that deal with language and understanding (see figure 3).

One final point about the logical architecture. The hierarchical structure of the Cortex is mirrored in the central hub, particularly in the Thalamus and Basal Ganglia, where we see the topology of the cortical Columns preserved through indirect pathways via central hub structures (figure 4).

Each Column has approximately 6 distinct “layers”. Like every biological rule, there are exceptions; but it suffices for the level of detail we require here. The layers are visual artefacts resulting from variations in cell type, morphology, connectivity patterns and therefore function between the layers (figure 5).

The Cortex has only 5 functional layers. Structurally, it has 6 gross layers; but one layer is just wires; no computation. In addition, the functional distinction between layers 2 and 3 is uncertain, so we will group them together. This gives us just 4 unique functional layers to explain.

We will use the notation C1 … C6 to refer to the gross layers:

The cortex is made of a veritable menagerie of oddly shaped cells (i.e. Neurons) that are often confined to specific layers (see figure 6). Neurons have a body (soma), dendrites and axons. Dendrites provide input to the cell, and reach out to find that data. Axons transmit the output of the cell to places where it can be intercepted by other cells. Both dendrites and axons have branches.

An important feature of the Cortex is the presence of specialized Neuron cells with pyramidal Soma (bodies) (figure 7). Pyramidal cells are predominantly found in C2/3, C5 and C6. They are very large and common cells in these layers.

Pyramidal cells do not behave like classical artificial neurons. We agree with Hawkins’ characterisation of them. Pyramidal cells have two or three dendrite types: Apical (proximal or distal) dendrites and Basal dendrites. Distal Apical dendrites seem to behave like a classical integrate-and-fire neuron in their own right, requiring a complete pattern of input to “fire” a signal to the body of the cell. In consequence, each cell can respond to a number of different input patterns, depending on which apical dendrites become active from their input.

Hawkins suggests that the Basal dendrites provide a sequential or temporal context in which the Pyramidal cell can become active. Output from the cell along its axon branches  only occurs if the cell observes particular instantaneous input patterns in a particular historical context of previous Pyramidal cell activity.

Within one layer of a Column, Pyramidal cells exhibit a self-organising property that results in sparse activation. Only a few Pyramidal cells respond to each input stimulus. The Pyramidal cells are powerful pattern and sequence classifiers that also perform a dimensionality-reduction function; when active, the activity of a single Pyramidal cell represents a pattern of input over a period of time.

That’s all we feel is necessary to say about the gross physical structure of the Thalamo-Cortical system and the microscopic structure of its cells and layers. The next article will look at the circuits and pathways by which these cells are connected, and the computational properties that result.
Tags:columnshierarchyneurobiologyThalamocortical