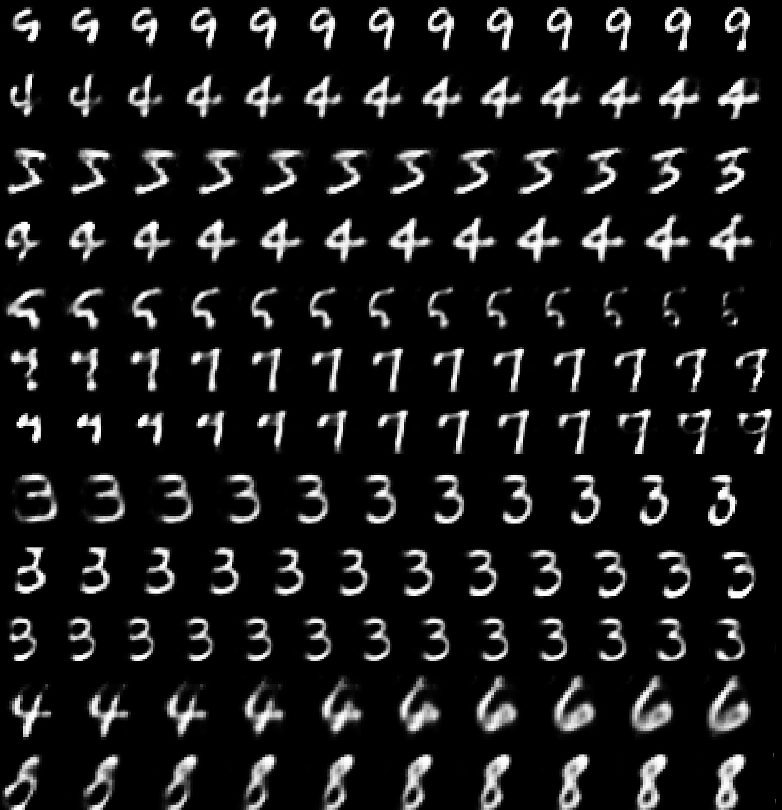 We are exploring the nature of equivariance, a concept that is now closely associated with the capsules network architecture (see key papers Sabour et al, and Hinton et al). Machine learning representations that capture equivariance must learn the way that patterns in the input vary together, in addition to statistical clusters in the input (that a typical neural network discovers). This is very useful, because in theory it should improve generalisation.

In the process we have found hints that conventional discriminatory training of networks causes pathological form of “brittleness”. Capsules networks seem to avoid or at least mitigate this issue. As shown below, in some ways the output of conventionally trained networks is worse than an untrained network of the same geometry!

This article will describe the performance of a set of related architectures, derived from standard feed-forward convolutional networks. Some of the architectures are intended to be equivariant; others not. By exploring which features give rise to equivariant representations, we hope to refine our understanding and how to achieve equivariance.

To understand equivariance, it is helpful to first consider invariance. Invariance is often a stated goal of representation-learners: Perhaps we want to output a ‘1’ value from our classifier whenever a dog is observed. Since the output is identical whenever a dog is present, we can say the classifier is “invariant” to changes in dog appearance or pose. But invariance doesn’t communicate much information about the entity.

By contrast, a ‘dog’ capsule won’t output the same value[s] whenever a dog is observed. Instead, it will output a set of varying parameters that describe the current pose, appearance or other salient features of the dog. These parameters are equivariant – they are not invariant. (You can find a formal definition of equivariance here). By varying systematically, an equivariant representation of a dog communicates much useful information about the dog being observed.

Our results suggest that four factors are necessary to enable a representation to capture equivariance:

From our results we believe – but have admittedly not yet proven – that capsules generalize better due to the representation capturing and encoding the ways that entities in the input vary. Samples outside the training data set may then be represented by more extreme configurations of the existing parameters, without further learning. This adjustment happens automatically on exposure to new input, without permanent weight adaptation. Since consumers of the representation must already have learnt how to interpret continuous variation in these parameters, it is possible that the learned interpretation includes generalization to more extreme values.

Our recent arXiv upload “Sparse Unsupervised Capsules generalize better” showed that a sparse, unsupervised capsules network can generalize effectively from MNIST training data to affNIST (affine transformed MNIST digits). We did not train our capsules network on affNIST at all, yet our capsules representation achieved better classification accuracy than all the other results we could find (except one very sophisticated network explicitly designed to model affine transformations, which had similar performance to ours). Many of the other inferior results were also trained on affNIST input and therefore weren’t even trying to generalize! So we take this as a good piece of evidence that Capsule networks might generalize better than conventional (non-capsule) networks.

This article will primarily use images of univariate perturbations of network hidden layer state to explore the variations captured by each representation. Unfortunately these are subjective, qualitative measures. It would clearly be more ideal to use objective, quantitative metrics to evaluate the equivariance of a representation, but we have not researched this topic sufficiently to arrive at a good method.

We will also use some numerical metrics such as classification accuracy and mean-square-error reconstruction loss to quantitatively measure the quality of representations, though on MNIST these are not very useful as the dataset is too simplistic. They mainly serve to detect algorithm defects.

We can expect stroke-based glyphs to have a common set of equivariances, that result from the way the glyphs are formed. These are nicely illustrated in Sabour et al fig.4, reproduced here:

We tested several network architectures. Each architecture consisted of a 3-layer Encoder combined with a 3-layer Decoder network.

One decoder optimizes reconstruction loss, which makes the complete network an autoencoder. This tests the information content of the hidden layers. The other decoder optimizes classification accuracy, which results in a conventional feed-forward network (ignoring bidirectional connections inside some of the encoder layers, in the capsules algorithm).

To improve the fairness of the comparisons, the number of filters and other geometric properties of the encoders and decoders are kept constant. The training regimes, learning algorithms and nonlinearities such as group selection are varied.

One of the networks we tested is a new algorithm we have invented, called Predictive Capsules or PredCaps for short. There’s not enough time or space to explain PredCaps in this article but it could be substituted for other Capsules encoders such as the architectures in Sabour et al or Hinton et al. We believe the fundamental insights of this article would be unchanged; for example, the reported equivariances appear similar.

PredCaps was motivated by a set of biologically plausible design goals, which result in the following advantages:

In total, 6 network architectures were tested. They were:

The results are summarized in a table below. There are some surprising and provocative results.

First, all 3 encoders are able to produce output that permits very good classification accuracy. Do bear in mind that MNIST is sufficiently “easy” that excellent classification performance is expected. The decoder network is very powerful, so this isn’t a total surprise, but it does tell us some things:

Reconstruction losses were more varied. Enc-Untrained is much worse than the other encoders – the difference is visible to the eye too, with the reconstructed digits being blurred and degraded. However, both Enc-Deep-BP and Enc-PredCaps produce very accurate reconstructions. This provides further evidence that both encodings preserve almost all information, despite sharing a small bottleneck of just 256 elements.

Now we get to the interesting part. We individually perturbed each element of the encoder output and observed the resulting decodings, looking for evidence that the encoding is equivariant. Of course, when exposed to real data the parameters vary in combination, but this space is too large to explore easily. The same perturbations were made to all networks’ 3rd encoder layer output, prior to decoding. We made the following observations:

Demonstration of PredCaps encoder equivariance, illustrated by showing MNIST digit reconstruction while varying individual parameters in the deepest capsules layer. Note that all reconstructions appear to be plausible digits. Each sample is shown with a range of scaling factors, from lowest (leftmost) to highest (rightmost). Left column, from top to bottom: ‘9’: Loop closure and tail length. ‘4’: Open and closed forms of the digit. ‘5’-’3’: Digit morphing and skewing. Note that training is unsupervised, so distinct capsules for specific digits are typically not discovered. ‘4’: Convex to concave shaping. ‘5’: Stroke width and intensity. ‘7’: Curvy to straight strokes. Right column, from top to bottom: ‘4’-’7’ morphing and form variation. ‘3’: Digit width and form changes. ‘3’: Localized part variation (centre stroke, and position of ‘waist’ from concave to convex). ‘4’: Digit morphing and size change. ‘8’: Loop closure – a result of stroke-based handwriting. 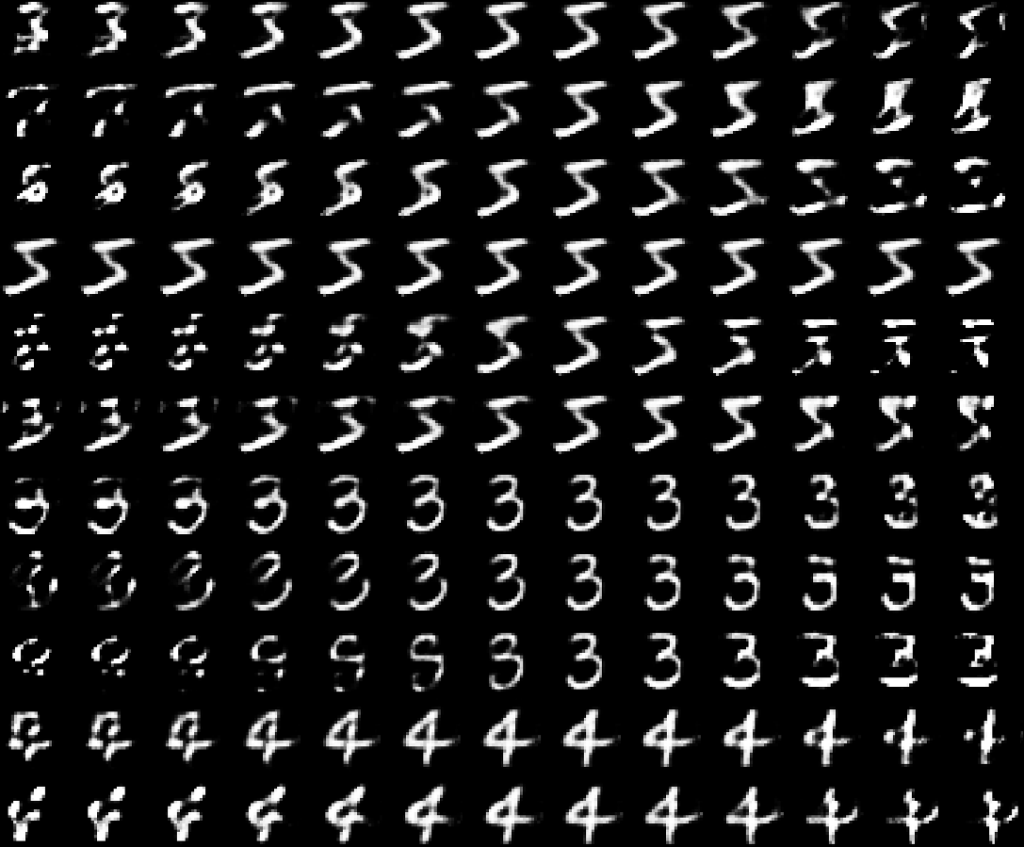 Not equivariant: Dense convolutional network encoder reconstructions after univariate perturbations The same decoder and method of perturbing the hidden layer are used in all examples. Notice that although some transformation of digits is possible, at extremes they break up into blobs and dots that do not resemble the digits 0..9. This is because the non-capsular network only captures statistical clusters in the data and does not model the way certain structures in the input vary. 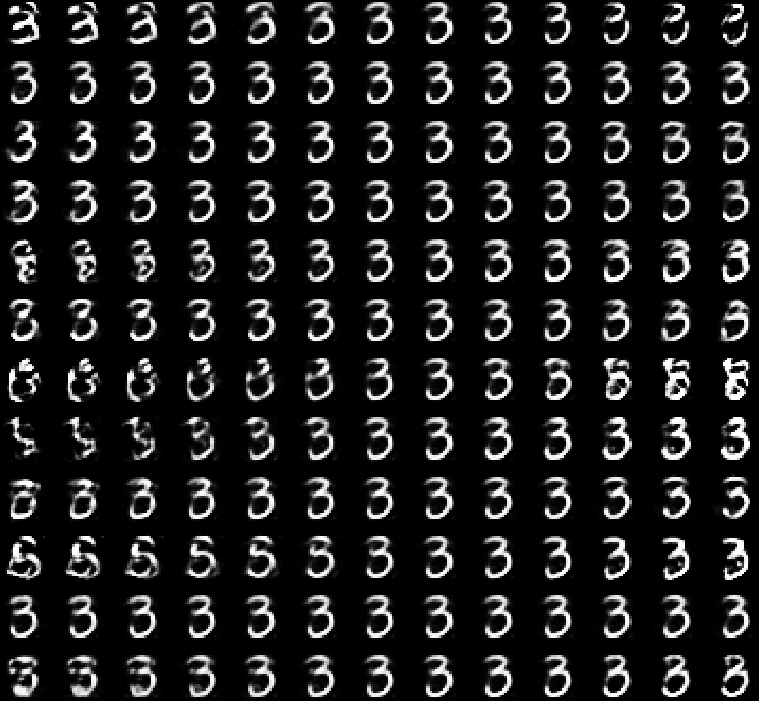 Probably not equivariant: Reconstructions after perturbing the deepest hidden layer of an *untrained* dense convolutional network encoder. Notice that although the forms become somewhat broken, the effect is less pronounced than with the trained dense convolutional encoder. However, although the digit forms vary more smoothly, the resulting glyphs aren’t always recognizably numerical digits, unlike using a Capsules algorithm. 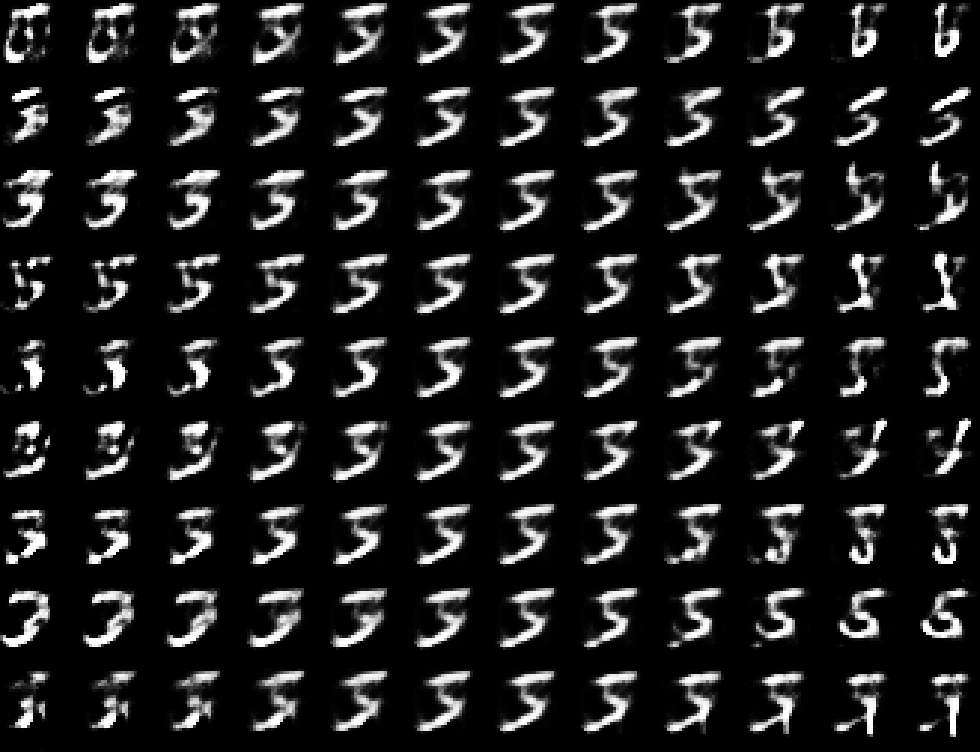 Also not equivariant: To verify that sparseness alone is insufficient to learn equivariant representations, we also tested a sparse convolutional network encoder. This algorithm is similar to Makhzani and Frey “K-Sparse Autoencoders”. As with dense convolutional networks, digit forms break up into strokes and blobs after univariate perturbation. Hence, we believe that sparseness is not enough.

These results reveal something fascinating about the effect of conventional convolutional network training using gradient descent. Whereas a random, untrained encoder network can be decoded in a manner that is somewhat resistant to univariate perturbations, resulting in smoothly varying although not recognizable digit-forms, univariate perturbations of the trained network result in spotty, broken forms that don’t look like digits at all. The training process has sensitized the complete network such that small changes in the deepest hidden layer can disrupt reconstruction producing output that does not resemble the training data at all. This is a form of brittleness – only very close matches to the training data can be effectively encoded.

Overfitting and poor generalization are known to be common problems for deep networks trained in this manner. If the training process discovers statistical clusters in the input and then learns to identify the presence or absence of these, it may become less able to describe input that is not within these clusters. As a result, the network is only able to produce meaningful and useful results in a small subset of its possible configurations.

Obviously, not training networks is not the answer! (Extreme Learning Machines might disagree). Although it was still possible to classify the digit given an untrained network, image reconstruction was badly affected by the absence of training. Capsules algorithms such as PredCaps appear to offer the best of both worlds – an ability to capture almost all input information in a small number of parameters, while simultaneously being able to describe unseen variants of the input using different values of the same parameters. A wide variety of PredCaps hidden layer configurations produces recognizable numerical digit-forms under various transformations.

The ultimate test of equivariant representations is whether they achieve the core objective of improved generalization. We are now testing PredCaps on the MNIST → affNIST generalization task, and on more sophisticated datasets (including smallNORB).