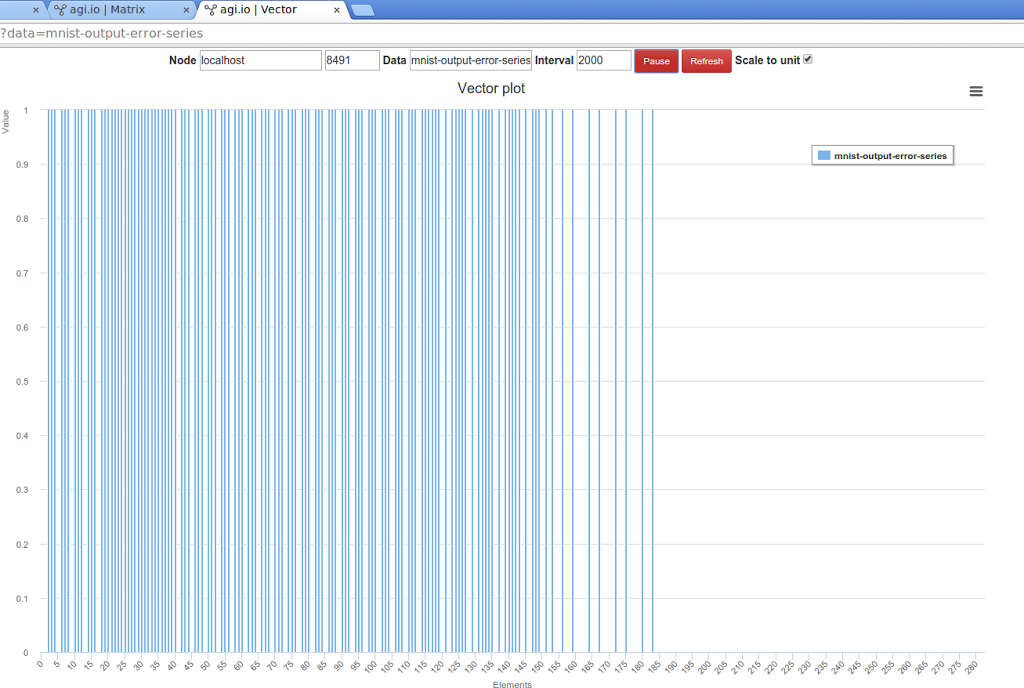 A few weeks ago we paused the “How to build a General Intelligence” series (part 1, part 2, part 3, part 4). We paused it because the next article in the series requires us to specify everything in detail, and we need working code to do that.

We have been testing our algorithm on a variety of MNIST-derived handwritten digit datasets, to better understand how well it generalizes its representation of digit-images and how it behaves when exposed to varying degrees of predictability. Initial results look promising: We will post everything here once we’ve verified them and completed the first batch of proper experiments. The series will continue soon!

Our algorithm is a type of Online Deep Unsupervised Learning, so naturally we’re looking carefully at similar algorithms.

We recommend this video of a talk by Andrew Ng. It starts with a good introduction to the methods and importance of feature representation and touches on types of automatic feature discovery. He looks at some of the important feature detectors in computer vision, such as SIFT and HoG and shows how feature detectors – such as edge detectors – can emerge from more general pattern recognition algorithms such as sparse coding. For more on sparse coding see Shakir’s excellent machine learning blog.

For anyone struggling to intuit deep feature discovery, I also loved this post on yCombinator which nicely illustrates how and why deep networks discover useful features, and why the depth helps.

The latter part of the video covers Ng’s latest work on deep hierarchical sparse coding using Deep Belief Networks, in turn based on AutoEncoders. He reports benchmark-beating results on video activity and phoneme recognition with this framework. You can find details of his deep unsupervised algorithm here:

Online K-sparse autoencoders (with some deep-ness)

We’ve also been reading this paper by Makhzani and Frey about deep online learning with auto-encoders (a type of supervised learning neural network that is used in an unsupervised way to reconstruct its input, often known as semi-supervised learning). Actually we’ve struggled to find any comparison of autoencoders to earlier methods of unsupervised learning both in terms of computational efficiency and ability to cover the search space effectively. Let us know if you find a paper that covers this.

The Makhzani paper has some interesting characteristics – the algorithm is online, which means it receives data as a stream rather than in batches. It is also sparse, which we believe is desirable from a representational perspective.
One limitation is that the solution is most likely unable to handle changes in input data statistics (i.e. non-stationary problems). The reason this is an important quality is that in any arbitrarily deep network the typical position of a vertex is between higher and lower vertices. If all vertices are continually learning, the problem being modelled by any single vertex is constantly changing. Therefore, intermediate vertices must be capable of online learning of non stationary problems otherwise the network will not be able to function effectively. In Makhzani and Frey, they instead use the greedy layerwise training approach from Deep Belief Networks. The authors describe this approach:
“4.6. Deep Supervised Learning Results The k-sparse autoencoder can be used as a building block of a deep neural network, using greedy layerwise pre-training (Bengio et al., 2007). We first train a shallow k-sparse autoencoder and obtain the hidden codes. We then fix the features and train another ksparse autoencoder on top of them to obtain another set of hidden codes. Then we use the parameters of these autoencoders to initialize a discriminative neural network with two hidden layers.”

The limitation introduced can be thought of as an inability to escape from local minima that result from prior training. This paper by Choromanska et al tries to explain why this happens.
Greedy layerwise training is an attempt to work around the fact that deep belief networks of Autoencoders cannot effectively handle nonstationary problems.For more information here’s some papers on deep sparse networks built from autoencoders:

Variations on Supervised Learning – a Taxonomy

Weakly supervised learning: [For poorly labelled training data] where you want to learn models for object recognition under weak supervision – you have say object labels for images, but no localization (e.g. bounding box) for the object in the image (there might be other objects in the image as well). You would use a Latent SVM to solve the problem of localizing the objects in the images, and at the same time learning a classifier for it.
Another example of weakly supervised learning is that you have a bag of positive samples mixed up with negative training samples, but also have a bag of purely negative samples – you would use Multiple Instance Learning for this.Cross-modal adaptation: where one mode of data supervises another – e.g. audio supervises video or vice-versa.

Domain adaptation: model learnt on one set of data is adapted, in unsupervised fashion, to new datasets with slightly different data distributions.

Transfer learning: using the knowledge gained in learning one problem on a different, but related problem. Here’s a good example of transfer learning, a finalist in the NVIDIA 2016 Global Impact Award. The system learns to predict poverty from day and night satellite images, with very few labelled samples.

We enjoyed this interactive map of the distribution of concepts within the cortex captured using fMRI and produced by the Gallant Lab (source papers here).

Using the map you can find the voxels corresponding to various concepts, which although maybe not generalizable due to the small sample size (7) gives you a good idea of the hierarchical structure the brain has produced, and what the intermediate concepts represent.Thanks to David Ray @ http://cortical.io for the link.

We also follow the OpenAI project with interest. OpenAI have just released their “Gym” – a platform for training and testing reinforcement learning algorithms. Have a play with it here:

According to Wired magazine, OpenAI will continue to release free and open source software (FOSS) for the wider impact this will have on uptake. There are many companies now competing to win market share in this space.

We’re regular readers of this blog and have been meaning to mention it for months. Worth reading.

How the brain generates actions

A big gap in our knowledge is how the brain generates actions from its internal representation. This new paper by Vicente et al challenges the established (rather vague) dogma on how the brain generates actions.
“We found that contrary to common belief, the indirect pathway does not always prevent actions from being performed, it can actually reinforce the performance of actions. However, the indirect pathway promotes a different type of actions, habits.”This is probably quite informative for reverse-engineering purposes. Full paper here.

HTM is an online method for feature discovery and representation and now we have a baseline result for HTM on the famous MNIST numerical digit classification problem. Since HTM works with time-series data, the paper compares HTM to LSTM (Long-Short-Term Memory), the leading supervised-learning approach to this problem domain.

It is also interesting that the paper deals with adaptation to sudden changes in the input data statistics, the very problem that frustrates the deep belief networks described above.