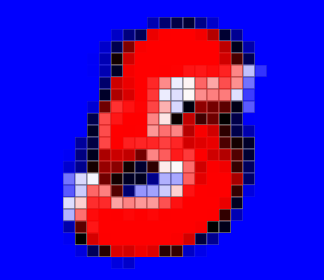 We are running a series of experiments to test the capabilities of the Region-Layer component. The objective is to understand to what extent these ideas work, and to expose limitations both in implementation and theory.

Results will be posted to the blog and written up for publication if, or when, we reach an acceptable level of novelty and rigor.

We are not trying to beat benchmarks here. We’re trying to show whether certain ideas have useful qualities – the best way to tackle specific AI problems is almost certainly not an AGI way. But what we’d love to see is that AGI-inspired methods can perform close to state-of-the-art (e.g. deep convolutional networks) on a wide range of problems. Now that would be general intelligence!

The good thing about MNIST is that it’s simple and has been extremely widely studied. It’s easy to work with the data and the images are a practical size – big enough to be interesting, but not so big as to require lots of preprocessing or too much memory. Despite only 28×28 pixels, variations in digit appearance gives considerable depth to the data (example digit ‘5’ above).

The bad thing about MNIST is that it’s largely “solved” by supervised learning algorithms. A range of different supervised techniques have reached human performance and it’s debatable whether any further improvements are genuine.

So what’s the point of trying new approaches? Well, supervised algorithms have some odd qualities, perhaps due to the narrowness of training samples or the specificity of the cost function. For example, the discovery of “adversarial examples” – images that look easily classifiable to the naked eye but cannot be classified correctly with a trained network because they exploit weaknesses in trained neural networks.

But the biggest drawback of supervised learning is the need to tell it the “correct” answer for every input. This has led to a range of techniques – such as transfer learning – to make the most of what training data is available, even if not directly relevant. But fundamentally, supervised learning is unlike the experience of an agent learning as it explores its world. Animals can learn without a tutor.

One possible method of capturing the contribution of unsupervised layers alone is the Rand Index, which measures the similarity between two clusters. However, we are intending to use a distributed representation where there will be overlap between similar representations – that’s one of the features of the algorithm!

So, for now we’re going to go for the simplest approach we can think of, and measure the correlation between the active cells in selected hidden layers and each digit label, and see if the correlation alone is enough to pick the right label given a set of active cells. If the concepts defined by the digits exist somewhere in the hierarchy, they should be detectable as features uniquely correlated with specific labels…

Note also that we’re not doing any preprocessing of the MNIST images except binarization at threshold 0.5. Since the MNIST dataset is very high contrast, hopefully the threshold doesn’t matter much: It’s almost binary already.

Before we start the experiments proper we conducted some ad-hoc tests to verify the features of the Region-Layer are implemented as intended. Remember, the Region-Layer has two key capabilities:

See here and here to understand the classification role, and here for more information about prediction. Taken together, the ability to classify and predict future classifications allows sequences of input to be learned. This is a topic we have looked at in detail in earlier blog posts and we have some fairly effective techniques at our disposal.

We completed the following tests:

After completion of the unit tests we were satisfied that our Region-Layer component has the ability to efficiently produce variable order models of observed sequences using unsupervised learning, assuming that the states can reliably be detected.

Now we come to the harder part. What if each digit exemplar image is ambiguous? In other words, what if each ‘0’ is represented by a randomly selected ‘0’ image from the MNIST dataset? The ambiguity of appearance means that the observed sequences will appear to be non-deterministic.

We decided to run the following experiments:

In this experiment there will be no predictable sequence; each digit must be recognized solely based on its appearance. The classic experiment is used: Up to N training passes over the entire MNIST dataset, followed by fixing the internal weights and a single pass to calculate the correlation between each active cell in selected hidden layer[s] and the digit labels. Then, a single pass over the test set recording, for each test input image, the most highly correlated digit label for each set of active hidden cells. The algorithm gets a “correct” result if the most correlated label is the correct label.

Present each digit in the training set once, in a random order. Train the internal weights of the algorithm. Repeated several times if necessary.

Present each digit in the training set once, in a random order. Accumulate the frequency with which each active cell is associated with each digit label. After all images have been seen, convert the observed frequencies to correlations.

Present each digit in the testing set once, in a random order. Use the correlations between cell activity and training labels to predict the most likely digit label given the set of active cells in selected Region-Layer components (they are arranged into a hierarchy).

What if the digit images are not in a random order? We can use the English language to generate a training set of digit sequences. For example, we can get a book, convert each character to a 2 digit number and select random appropriate digit images to represent each number.

The motivation for this experiment is to see how the sequence learning can boost image recognition: Our Region-Layer component is supposed to be able to integrate both sequential and spatial information. This experiment actually has a lot of depth because English isn’t entirely predictable – if we use a different book for testing, there’ll be lots of sub-sequences the algorithm has never observed before. There’ll be uncertainty in image appearance and uncertainty in sequence, and we’d like to see how a hierarchy of Region-Layer components responds to both. Our expectation is that it will improve digit classification performance beyond the random image case.

In the next article, we will describe the specifics of the algorithms we implemented and tested on these problems.

A final article will present some results.